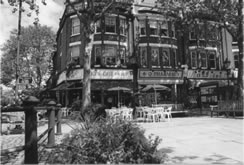 The delightful Kew Village has a host of lovely shops including a grocery store, butchers, bank, bakery, and many more, The local restaurants include the famous Glass House (early reservation is a must), cafes for great lunches and the underground station all within walking distance from the apartments.

Kew is also home to the Royal Botanical Kew Gardens and the Public Records Office with treasures from The National Archives dating back thousands of years.

You can also take boat rides along the river Thames to Hampton Court Palace which dates back to Henry the 8th. A longer boat ride in the opposite direction will take you all the way to Westminster.

Further afield, Kew is ideally located for exploring places like Windsor and Warwick Castles, Stonehenge and Stratford-Upon-Avon or even day trips to Paris!

Kew is served by the London Underground trains (TFL) and Kew Gardens station is on the district line which takes you straight into the city centre. There is also and overground train (Sliver Link City Line) which takes you round the City perimeter via North London. Central London is only a 20 minute train ride and Heathrow International Airport only a 20 minute drive away.

Nearby Richmond has an abundance of shops, restaurants, cafes, and lots more including Richmond Theatre, swimming pool, golf courses, horse riding in Richmond park and lovely walks along the river Thames.

Things to Do in West London:

For more places to eat go to London Restaurant Guide

IVHE trades in the premium sector of the second property market. Our easy to use credit system presents you with many choices to travel to exquisite destinations leveraging your valuable asset, your vacation property. How it works, IVHE luxury home exchange.